This RJ connector assembly machine, based on the material properties & assembly process analysis, is designed and developed in full-custom to provide the 3P RJ  connector manufacturer and factories with an excellent assembly automation solution with target to reduce labor cost and achieve a great cost-effective goal. 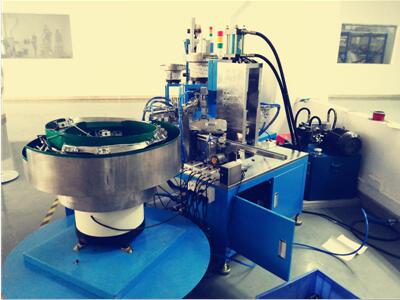 The Pin Terminal for this 3P RJ connector with its in-come form of coil-feeder that all pin terminal are prepared on metal stripe in a coiler, a motor on the top of assembly machine will rotate while feed the terminal pin in coil one by one.

The plastic moldings, because of its light weight and regular shape, is determined to take the loading and feeding method of vibratory feeder bowl to load and feed plastic molding one by one.

For Pin Terminal, it will be easy to orientate and sequence them because the in-come raw material in strip and the 3P RJ  male connector assembly machine only need the pin terminal feeding in a constant speed that can come with the speed of assembly process.

Before Assembly, The plastic molding must be located well so that to insert the pin terminals in accurate method.

Terminal pin loaded through coiler and must be cut into single piece and held, then inserted into the plastic molding.

A complex mechanism must be introduced to fulfill those movement to guarrantee the terminal pin inserted and then a final product of 3P RJ Male connector is made.